This has never merely been "two sides to the same story". This is literally Real vs Wrong. 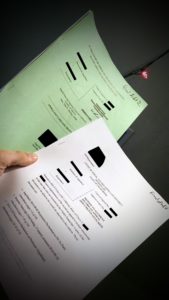 I move to impeach Respondent for her incapacity for honesty, as it is this same dishonesty that has manipulated this entire case in her favor. There has been no official psychological evaluation done of Lily, and if one is necessary to exonerate my daughter from her mother’s “cherry-picked” hopeful diagnosis, then we demand Lily has a county psychological examination for an unbiased evaluation. She does not have “Oppositional Defiant Disorder”. This is a factitious diagnosis facilitated by Respondent to further her motives {See EXHIBIT}, all the way back to her confusing intention of getting her in therapy for allegedly “lying”. I’ve pointed out evidence of suspicion of her own factitious “disabilities” from numerous sources. I’ve requested a psychological evaluation of Respondent since the start, when she tried to shoehorn false allegations of “crossdressing”, “confusing the kids”, and “yelling all the time” as *equal* to “imminent threat of physical harm”.

At minimum,
1) Respondent was suspected in 2012 by a custody evaluator of factitious disabilities.
2) Respondent used her access to therapy to manipulate her own personal therapist toward her confirmation bias, then
3) proceeded to do the same to Lily to discredit her,
4) proceeded to use every bit of systemic discrimination and bias to her advantage, while 5) socially ruining my reputation with slander to people who are clueless of any bit of honor.

I don’t know what I don’t know. Ventura County Superior Court has placed me in an increasingly impossible situation, spanning multiple years, kept my stepchildren from me based on fraudulent testimony, and then took my daughter from me and forced her into the access of the person who hurts her, after legitimately reported too many times. The judge’s perception and judgments of this case have been completely wrong. The judge has allowed himself to be influenced by a sociopathic narcissistic — the same one who pretended to love me for over eight years while actually biding her time to systemically get rid of me. This same person influences her lawyer and the mediator with endless lies, even throwing the PD and CPS off her trail, and the court’s lack of capable or timely decision making has taken in Respondent’s thoroughly established biases, hearsay, slander, fraud, emotional manipulation, and rampant physical and psychological abuse through these people verbatim, while pretending I’m just “misunderstanding” the last ten years of my life.

List of people who have said Lily exhibits these “problems”

In my own life, before the election, I was harassed by a proven Stolen Valor, proud to be born on the same day as Hitler, and a vocal Trump supporter Jymie Lynn (“Darling”) Owens, who claims to be a doctor but is not. My ex wife (Respondent), suspected of factitiously diagnosed mental disorders, believed she was a “doctor”, so Jymie’s instigation on two occasions inspired the mentally unstable person Respondent to commit aggravated kidnapping of children due to coerced imagined fear of dread, by way of influencing a “Transgender Panic Scare” tactic. Jymie’s instigation was retaliation for what she perceived to be an online “challenge to her authority” of knowledge, and it is a repeating abusive behavior of hers, as can be testified by many of her victims now.

This person demonstrates to be an instigator of arguments and violent suggestions against anyone who disagrees with her, to the point at one time it caused her to exit a long-term business partnership with her lover, and spread rumors about the incident. She would even argue on Facebook, pitting her friends against each other, about a math problem that she asserts there’s an “American way that’s wrong” and “her way” that’s the “same as the way the rest of the world does it” or something. She was still being pointed out by multiple caring friends regarding inaccuracies in her method, and she would lash back with insults and tag others to join in on her verbal attacks of who she considered dissenters to her ideas, went forward to block me as part of one of these people, then insult me publicly about it. I retained a copy of her response afterward, and possibly a copy of the math problem conversation, and the thread in the occult group that supposedly led her to think I was showing signs of being a “family annihilator” when I was simply asking multiple relevant philosophical questions I had saved for such a conversation, well within the topics of discussion in the online group.

This case involving multiple kidnappings, fraud, and rooted in transgender discrimination, will be resolved by pressing for charges on Respondent. But for Jymie, we have many points of evidence of her manipulative behavior, and now other people who she has pulled the same type of mental defamation scam simply by planting her slithering persuasive seed.

Jymie Owens/Darling was certainly not licensed or qualified to presume any diagnoses of me through my ex wife.